Nobel Prize winning novelist and short story writer William Faulkner was born on September 25, 1897, in rural Mississippi, the state he lived in for the rest of his life and where he set most of his books, usually in the fictional Yoknapatawpha County.

At birth Faulkner’s name was Falkner, but sometime in 1918 when he was training to join the RAF in Toronto and Whitby, Ontario, he changed the spelling to Faulkner. 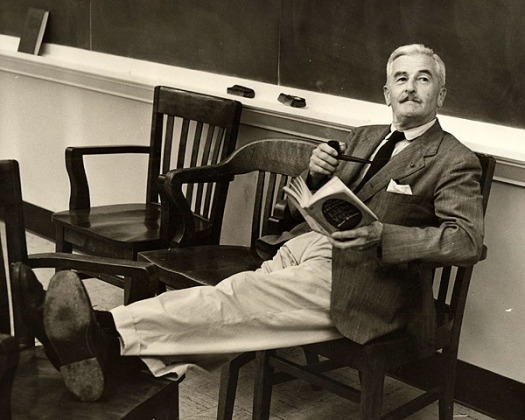 There are lots of fanciful theories about why he changed the spelling, but the one I like, even though I don’t believe it for a minute, is that while in Toronto he saw lots of familiar words with an extra “u” in them (colour, humour, honour, flavour, etc.) and just wanted to fit in.

The reason he was in Toronto is that he had tried to enlist in the American Army to fight in World War I but was rejected because of his height. (He was only a shade above 5 foot 5 inches.) The RAF had no such restrictions.

In truth he never made it overseas, injuring himself during training in Canada, but that didn’t stop him from returning to Mississippi with a limp, a uniform and a raft of made-up stories of his daring do fighting in the war and being shot down over France.

This wild imagination stood him in good stead as a writer. I’ve read a lot of Faulkner over the years and I’m struck by his diction in particular. (His stuff is great to read aloud in your head,especially in a Southern drawl!) He also took some risks with form and modernist styles, like stream of conscious narrative, but his characters are never anything less than fully alive.